I mowed the lawn today. It's that time of year when everything is slowing down; it's drier and the grass isn't shooting up every week. I get to the end of a row and turn, and second-guess. Did I mow that line already? Or is it the line left from a week ago? And so I mow it again, just in case, and by the time I decide the yard is finished, I am hot and sweaty, longing for refreshment...and I am not satisfied that I really succeeded in mowing the lawn.

Today I feel like death is becoming that way to me. I've seen it before. It's happened before. I'm tired of it; tired of the grief, tired of the pain, the ramifications. I am resigned. It is the same line mowed over and over, and it doesn't seem to benefit anyone or anything. There is no refreshment. I am apathetic. It is old and dry.

But then I think of Job who suffered death and grief beyond anything I can imagine, and I hear his words, "Though He slay me, yet will I trust Him," and I know I believe it. The words from a new song by Andy Gullahorn repeat over and over in my mind:


They say God listens to our prayers,
When you're suffering, He holds you.
I don't feel Him anywhere,
That doesn't make it any less true.

I listened to those words earlier this week, and while I was hit by the stark truth I wondered, "How do I prove that to people? How do I say, 'Yes, this is the God I believe in, and I do not doubt Him'?"

My friend Joann died yesterday morning after a brief battle with cancer, a form of leukemia. Hers was a hopeful case, despite the shock of it to her and all of us who called her friend. The doctors caught it early, she started chemo and responded well. On top of that, her two brothers were a 100% match for a bone marrow transplant. Despite the hiccups, really, everything looked toward a healthy, hopeful recovery. We rejoiced with her, we prayed with her. We prayed for her husband and young son, for her extended family. She and her husband encouraged us with their trust in God's hand, no matter what.

And then a few weeks after the transplant, her husband sent out word that Joann was sick. And then we got the word that the cancer had returned and it was acute. Then a coma...then death. No miracle of healing. No grand stories. The same old, same old specter swept in and dried the field. One more notch on the death belt.

I'm writing this out of grief. I'm not angry or bitter. I'm tired, yes. I feel like I'm going over the same row that I've already mowed. I wish Joann's story had the ending of another young mom I heard about last week who had had stage 4 cancer, but has recently received a clean bill of health. The doctors can't find any trace of cancer in her body. I know that God can do that. I've believed it for Joann. I wonder if I needed to hear about this other mom last week so that I could remember God's sovereignty and omnipotence. Joann didn't die because He's not capable of miracles and of healing.

So why did she die? I don't know. But I know I trust God and that His promises are true:

"Be strong and courageous. Do not be afraid or terrified because of them, for the Lord your God goes with you; he will never leave you nor forsake you." (Deuteronomy 31:6)

"Come to me, all you who are weary and burdened, and I will give you rest. Take my yoke upon you and learn from me, for I am gentle and humble in heart, and you will find rest for your souls. For my yoke is easy and my burden is light. (Matthew 11:28-30)

"I have told you these things, so that in me you may have peace. In this world you will have trouble. But take heart! I have overcome the world." (John 16:33)

"For everything that was written in the past was written to teach us, so that through endurance and the encouragement of the Scriptures we might have hope." (Romans 15:4)

As I've been writing this, I've glanced out my window at our vegetable garden. While the lawn may be dry and slow-growing at this point of the summer, the garden is lush with fruit. Ruby tomatoes weigh down emerald branches, waiting for me to reach out, pluck them and enjoy the burst of tangy sweetness. They will refresh my body as God's promises refresh my spirit.

In the midst of suffering, there is always hope. I know that if God's promises were only true when they played out the way I think they should, or when I feel them, they wouldn't be promises, and God wouldn't be God. I will trust Him and enjoy the fruit that He has for me. 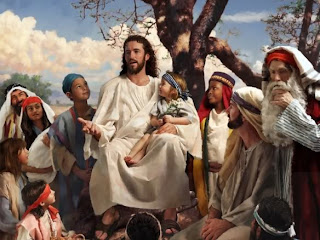 This morning I read Jesus' parable of the sower and the seed in the book of Mark, chapter 4, followed by the final chapter of Through a Screen Darkly, by Jeffrey Overstreet, and some thoughts converged. Always a little dangerous, I know, especially because these converging thoughts led me back to a conversation from my student-teaching days, which is now about twenty years ago. Time flies and all that.

Anyway, it wasn't the parable itself that hit me this morning, it was the context surrounding it. After Jesus told the story, his disciples pulled him aside and said, "Um, so what do you mean?" I love that, because it's such a human response, and so often my response. "Would you mind giving that to me line by line? I didn't catch it." In Jesus' response I can imagine him shaking his head a little sadly, maybe even in frustration. At one point he says, "But if you can't understand this story, how will you understand all the others I am going to tell?"

Immediately before that, he says something that seems absolutely insane.


"You are permitted to understand the secret about the Kingdom of God. But I am using these stories to conceal everything about it from outsiders, so that the Scriptures might be fulfilled:

'They see what I do, but they don't perceive its meaning. They hear my words, but they don't understand. So they will not turn from their sins and be forgiven.'" (Mark 4:11&12, NLT)

He used the stories to conceal things from outsiders so that Scripture could be fulfilled? What kind of loving God would do something like that? Why wouldn't He desire people to turn from their sins and be forgiven? Why wouldn't He make things so clear that even a child could get it?

I've gone over these verses many times over the years, I've heard good sermons preached about them, and even though I get them on one level, I find I have to think through them all over again when I return to them. I have to go back to who I know God to be based on all of Scripture: He is loving. He does not desire any to perish. He provided the one and only way for us to be rescued from self-destruction: Jesus. The problem is mostly that Jesus himself is an enigma, a stumbling block. And God is, too.

So Jesus told stories. And really, that was the best way to make his truth so clear that a child could get it. How many times have my kids truly understood things because they heard a story rather than a lecture? It's just that as adults we tend to hear a story and scoff, "Well, that's just a tale. Let me give you reality."

In his final chapter of Through a Screen Darkly, Jeffrey Overstreet hones in on a point he's made throughout his book: that the art of cinema is one that can lead us to the truth that is in Christ and in God. If we will see it, though, we have to actively engage it rather than letting it wash over us. Sure there is a place for pure entertainment, but much of movie-making is an art, and Truth (with a capital T) can be found in some of the strangest places. He writes how he is encouraged to see more Christians engaging this art with thoughtful intention, and as a result, engaging our culture more effectively.

Overstreet talks about a Christian arts festival he attended that showed films from Flickerings 2003, a venue for short films by Christians with strict limitations. Some of the restrictions included "Refrain from the use of popular religious symbols, including the cross. No church scenes. No conclusions that involve a conversion to Christianity," etc.


By these rules, Flickerings' founder coaxed Christian artists away from the simplistic, didactic, sentimental and condescending qualities often found in contemporary Christian art and entertainment, nudging them toward the language of metaphor. This unsettled some artists. they worried that viewers wouldn't "get their message." It's true--some didn't get their message, but some did. And some got more than the filmmakers had ever meant to convey. (p. 328) And I thought of the disciples asking Jesus for a translation, and Jesus telling stories so only those truly seeking him would "get it" (and even then we have to ask a lot of questions--which builds our relationship with him...I wonder if that's on purpose). And I remembered teaching the Medieval morality play Everyman to a group of Christian high school seniors. We delved into the story Everyman portrayed--a good-works-saves-you story, and we talked about the culture of that time where the majority of people couldn't read the Bible for themselves so had to rely on these defective plays for biblical understanding. One of my students asked, "But if this is all they had, how could they learn the truth?" It's a question that has resonated with me ever since, because I see so many things in our world that don't present the truth. I mean, most Christians don't present the truth, whether through words or conduct. We are certainly a faulty picture of Christ.

But God is actively at work, and His Truth is inescapable for any seeking it, no matter how badly the tale is told. And as believers, we need to let Him tell the tale through us, which may mean that our own lives will be strange stories that will either draw or repel others. I wonder, too, in this day and age where the written word is undervalued and visual media is the primary source of information and entertainment, if movies are the modern parables and morality tales.

The Truth is there for those who seek it.