It's hard to believe this is our third spring in our Trent Ct. home. Okay, so technically it's not the season of Spring till Sunday, but considering the weather today and yesterday, I'll call it spring. March has been more lamb than lion this year, and while I'm sure it still has some teeth to show, for now it's glorious and I'll take it! The other morning the kids and I watched a mallard pair scoping our neighbor's yard for potential nesting.... I'm convinced it's the same couple we've seen for three springs now. Makes sense, doesn't it? And the robins have been out in full song. Actually, this year I saw a bunch of robins in our February snow, which was very weird. I wonder if they decided it was better here in Michigan than the frigid snows of the south and east. We've also been closely monitoring the sprouts of bulbs we planted last fall, and many of the crocuses, tulips and daffodils are popping up. So exciting! 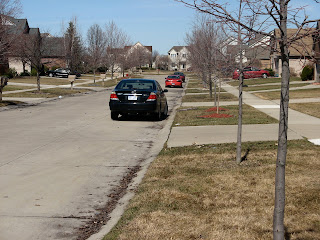 But yes, it's our third spring, and we took one of our favorite walks Tuesday to celebrate it. Our subdivision isn't fascinating, but it has great sidewalks and it's an easy, straight stretch to what has become known in our house as "The Ducky Pond." The Ducky Pond is actually not a pond at all. Rather, it's a creek. Or, to be even more correct, it's a storm drain, but that doesn't have anything attractive in its sound, so we stick with calling it The Ducky Pond. Besides, The Ducky Pond can be quite lovely, and it's full of birds, bushes and muskrats. Depending on the time of year, you can spot mallards with their ducklings, red wing blackbirds, or hear the croak of bullfrogs. There's a nice arched footbridge that spans the creek, and you can check out both sides. My only gripes are that the water doesn't move fast enough to play Pooh Sticks, and sometimes it looks pretty scummy. But I can't complain, because for the most part in the spring it looks like this picture (May 2008), and their are little to no bugs at this time of year: 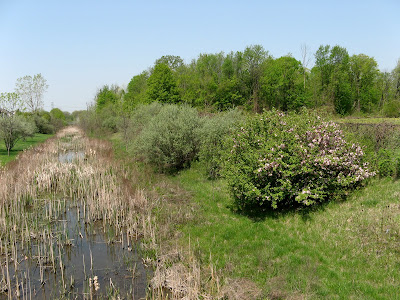 Below is what it looks like right now. Things are still brown, but signs of life are showing. Considering there was still snow covering most of the ground a week ago, it amazes me how much is growing. 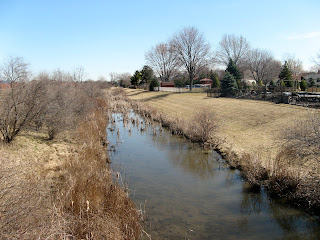 When you come off the bridge, you T into a smooth path that leads you toward a wood and then one of our main roads, or straight toward a local elementary school where Clare will go to kindergarten in the fall. Across the path is an open field, and that's where we often land for some play time. Even this early, though the ground was a little squishy, we could still run, and the girls didn't mind sitting. I brought snacks, and we practically made a picnic out of pistachios, Goldfish, and fruit snacks. 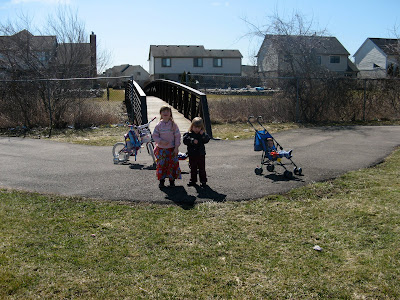 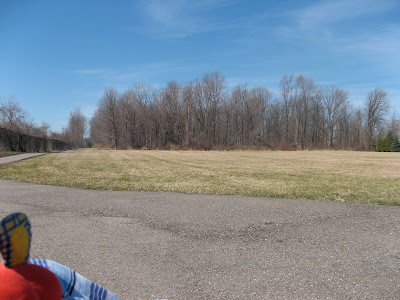 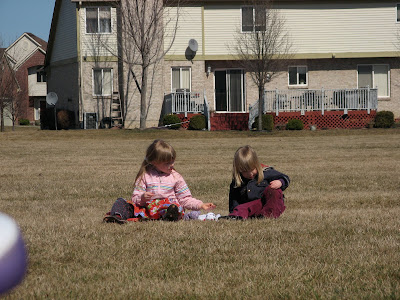 I almost always carry my camera on these walks, and as a result, I've got some fun contrast memories from previous spring treks. For instance, I caught Clare climbing up the rails of the bridge, and it was amazing to see how much she'd grown since May 2008: 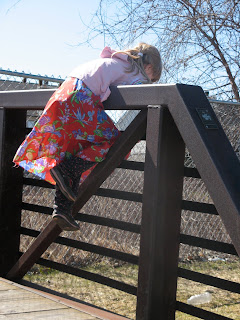 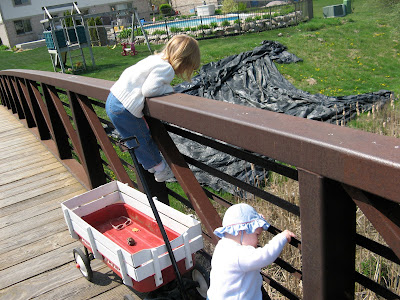 And then there was the end of March 2008 when we took the walk with snow: 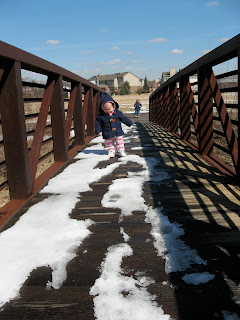 The wagon in the above photo has made the trip with us many times. Some of my sweetest memories are when I hauled all three girls out for the ride. We could make it across the bridge, take the path past the elementary school, then hike toward the Alleghany House (our old house owned by Kraig's folks, lived in by various and sundry of Kraig's sibs). It's always worth visiting, and sometimes we just had to get fresh air despite the challenge of moving three little children. 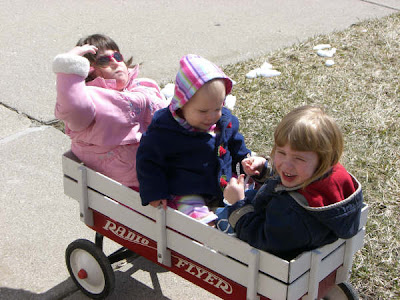 Of course, even in Spring of 2008, Clare and Ev did what they could to help! 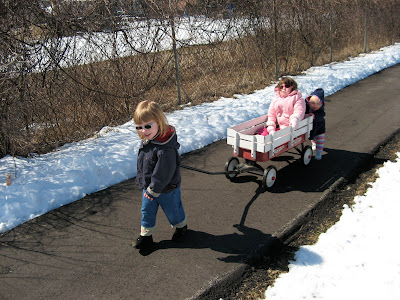 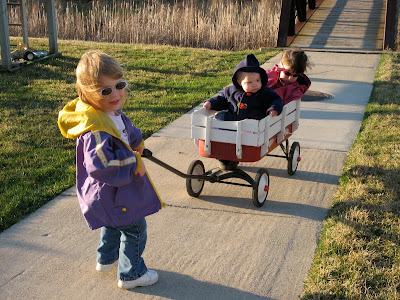 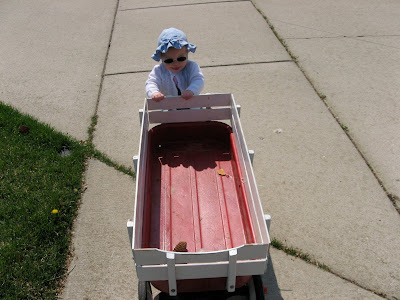 I know we made the trek a few times last spring but I didn't take my camera as much. It was too hard knowing we only had the two for the walk....

This spring things are different again, but in a good way. We have Jonathan adding his own new element. 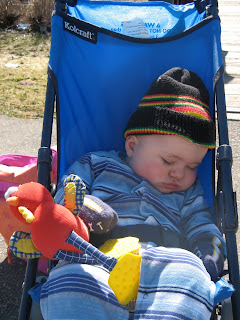 The girls are older now, their legs longer and they're able to peddle bikes farther. They are also forming their own fashion sense. Some days it's nice to let them wear whatever they choose; after all, who's going to see or care, and it's so neat to see them developing into the incredible girls God wants them to be. In the picture below, Clare was waving one of the pine branches that she discovered (all the leftover branches from Christmas trees are emerging from vanishing snowbanks) and singing. She was actually singing about palm branches and praise, but hey, who am I to argue?! 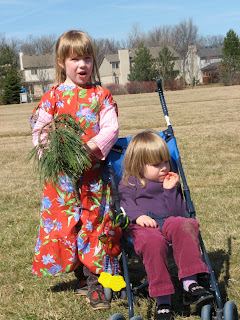 Who knows how many more springs we'll have at Trent Ct., but I know I'll always treasure these walks to The Ducky Pond.
Posted by Loren Warnemuende at 1:54 PM No comments: