The view from our dining room window is my favorite in our house. We look out through our front porch and the trees in our yard to the road that curves before our home and cuts down a hill through tall pines. Across the road, catty-corner, our neighbor's neat brick ranch sits on a rise with more pines towering high above it. Our window faces east, and the early morning sun is likely to hit one smack in the eyes as it lances through the trees.

There is always something to watch. The birds love the trees and sparrows, blue jays, cardinals, bluebirds, and the occasional woodpecker visit regularly bringing their songs with them. Last fall a hummingbird frequented the feeder hanging outside our window. Between sips of sugar water he'd perch up in the branches of the deciduous magnolia just where we could see him. While I'm sure part of his reason to hang out there was to be near his sugar supply, he also kept a sharp eye out for a rival hummingbird who liked to sneak some sugar before getting chased off. 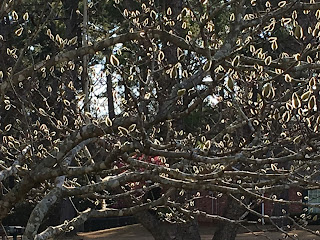 The magnolia is lovely throughout the year, but January is the month we watch it with anticipation. Its bare gray branches are limned with fuzzy greenish buds that wax fatter as the month warms. It's at that point now where the buds are likely to burst within a week depending on the weather. The buds are so tantalizingly full, and in the morning the early sun catches the fuzz on fire, casting a glimmering halo around each one. When they burst we will have a tree of large pink fragile blooms that will eventually fall and cover the ground like a silk carpet.

Christmas a year ago my folks carted a special stone marker to us from the oak in front of their Michigan home. The oak was planted on Keren's first birthday and the stone is engraved with the following: 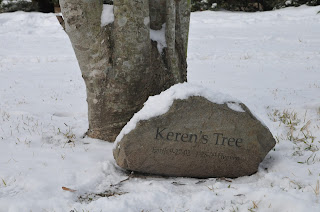 We placed it under the magnolia and last January we actually had snow, enough to line the stone and to give us a couple days of the snag of real cold in the back of the nose. It was a reminder of winters in Michigan, and the snow upon snow ten years ago when Keren slipped out of this world.

But this is Texas, and winter does not linger. The buds on the magnolia bloomed and within a month Keren's stone was littered with a plethora of pink petals.

It's still just a stone marker. It's not her. But Spring and blossoms never fail to remind me of our future hope, and that I will see her again.

Last fall turned out to be one of more farewells. In September my great-aunt Marge, my oldest relative on my mom's side, passed away only a couple months before her 104th birthday. The kids and I were able to see her just weeks before. We knew she neared her end, but our meeting was one of joy, and her voice and strong hand grip brought floods of good memories. Her parting was not one etched in sorrow.

Then on November 30, dear Grandma Givens, my last living grandparent, stepped into eternity six weeks after her 100th birthday. We saw her last July, and as it was with Aunt Marge, it was a visit of joy and memories. She slipped out of life in the sweetest way I've ever known, looking forward to actually seeing the Jesus she loved most of her life, and at the same time delighting in her sons who were able to be with her, and in the ice cream served for lunch. 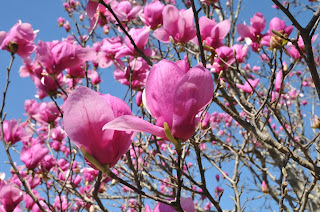 Both Aunt Marge's and Grandma's deaths were what one might call "good." There was a long life concluded with minds still sharp. Pain and suffering had played a significant roll in both of their lives, but Christ had as well, and in the end he was who mattered. It's sad to know that I won't see them again on this earth, but the promise of the resurrection gladdens me.

But death is death. It is not known for its sweetness. January this year could not sidestep it any more than that January ten years ago. We got news the first weekend of the year that the grown son of family friends was ripped from earth when a blood clot hit his heart. he left behind his wife and eight young kids. Soon after, the 4 1/2 year old son of one of Kraig's colleagues drowned--tragically, with no clear answers as to how. Friends, family, and acquaintances are left reeling. Death is rude and brutal, no question.

God, though, is neither rude nor brutal. He is, many times, incomprehensible, but I will take that alongside the other things that I know of Him. He is Love. He is Sovereign. He is able to take what is broken and brutalized and make it into something new and incomparably beautiful. He kicks in the teeth the suffering caused by death and says, "Look at what I can do with the agony you caused." He knows this agony intimately. He watched as we tore ourselves from Him in the Garden. He's seen us make a mess of things since and has stepped in again and again to keep us from completely destroying ourselves. All the while he has offered an alternative and a way back to Him through Christ. He did this even when He gave us His son to murder, and Christ suffered more than anyone has...for us. 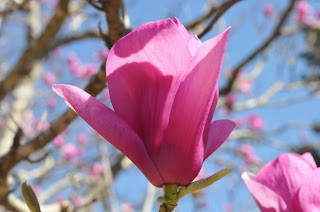 But, but, but--that's not the end. The end is resurrection, a remaking, a recreation. The magnolia tree will bloom. Spring will come. Resurrection is in the wings, and it will be glorious like the first resurrection.

In "His Heart Beats," Andrew Peterson sings about the first resurrection, and the future one:


His heart beats, He will never die again,
I know that death no longer has dominion over Him.
So my heart beats with the rhythm of the saints,
As I look for the seeds the King has sown
To burst up from their graves.

But Christ has indeed been raised from the dead, the first fruits of those who have fallen asleep. For since death came through a man, the resurrection of the dead comes also through a man. For as in Adam all die, so in Christ all will be made alive.