There is a part of me that never forgets this day of the year and always dreads it. A part of me that would rather it didn't sit there on the calendar, waiting, reminding. And yet this morning it was only as an afterthought I realized that the time during which I made breakfast and ate it with my family was the same time of day my eldest daughter died three years ago. 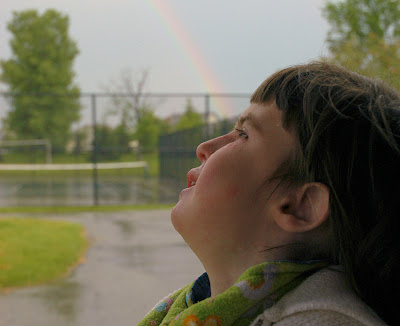 Oh such great significance her life and death that it's only as an afterthought I think of those final moments, right?

Oddly enough this is a thought that's been niggling at me for a while. How does Keren's life and death play out in the grand scheme of things?

Clarification: I have no doubt that her existence was fully planned and intended by God. I also have no question that she was a gift to us, and not only us, but many around us. Her life shaped Kraig and me in ways we never expected, and God grew us in ways I would never exchange. I know, too, that her death was in God's hand, and it happened exactly when it was supposed to. I was reminded of this twice this past week with Jesus' words in Revelation 1:16, "'I am the Living One; I was dead, and behold I am alive for ever and ever! And I hold the keys of death and Hades.'" Death has no power without Christ's permission. All these are truths I know, and I rejoice in them.

And yet, six-and-a-half years of life. What are those in the vast timeline of mankind? I've almost hit forty, my grandmother is 93 and I've got a great-aunt who's a cracking 97. And yet even our lives are so short on the line. So 6 1/2 years? What is that?

I suppose if I sat down and started listing things out I would see how much her short life has changed mine and my family's. I would see the myriad ways God has taught me more about unconditional love, the value of all lives no matter how fragile, His sovereignty and centrality of every part of my life. I know these are effects of having known Keren. But on the other hand, nothing huge has shifted. While she lived, Kraig and my world included multiple doctors, therapists, special education teachers, fellow parents. In the three years since then our tie to this world has grown thin. We still know some and stay connected in a way, but that is no longer our world. I regret that at times, but at the same time, I don't feel that God is calling us to try to keep close to this world. We will never forget it, and we value it much more than we ever could have without Keren, but it is not our world now. I don't know exactly where and what He is taking us into, but at the moment, I know it's not back into that world. Does that lessen the significance of Keren's life? Obviously no, but I can't see the big picture and so I wonder.

I suppose that one thing I have realized through Keren's brief life is how important every life is, no matter how short. Every life impacts another...and another...and so on. The ripples continue. My grandmother, for instance, has six sons, fourteen grandchildren, and numerous great-grandchildren who have watched her for years and have been blessed by her humble, godly spirit. That doesn't even begin to touch the hundreds of other lives she has touched. On the other hand, a life snuffed out deliberately, even before birth, affects others by its very absence. I've read some interesting discussions recently as to how the world would be different if Steve Jobs' biological mother had aborted him. Makes one think! The two miscarriages Kraig and I had before Keren deeply affected us. For one, if either had continued full-term, Keren would not have been conceived. For another, the very loss of them vastly changed our perspective on Keren's life when we knew prenatally she might have Trisomy 18. We knew we wanted her, longed for her, no matter what. We wanted her to live! And she did, longer than we had dared to hope. And the lives she touched go on to touch other lives, and so on. The individual timeline might be brief, but each life impacts a life.

I just wish I could see it all from God's perspective. But as I am not able to, I will continue to live here through the storms and floods and wait in confidence for His rainbows.
Posted by Loren Warnemuende at 11:22 PM 3 comments:

Learning to Love Round Tables

I've said it before. I'll probably say it again.

I have always hated it, though now that I'm "grown up" I hate it differently than when I was, say, four and threw a temper tantrum when my parents exchanged our rectangular dinner table for a round one. I have matured greatly, and I know now that fits over table changes is pretty juvenile, particularly when the rectangular one was a cheap temporary table my parents got when they were married, while the round one was an heirloom that still graces my parents' dining room and will be passed through generations. How silly I was!

No, now I just hate change with bursts of internal self-pity and outbursts of woe directed toward patient ears of trusted family and friends. There are also extended railings that go on toward God. See how much more mature I am?

Okay, enough sarcasm. In reality, I know God has helped me grow a lot regarding change. I've gotten much better at accepting it, and even my railing and venting is part of my processing, the moving of my heart to the same place of acceptance that my head is. Because I do know that God is so much bigger, and has a much better grasp on all of my circumstances than I ever could. It is He who will make everything beautiful in its time, and when I willingly let Him do that work, my heart changes and I see that the round table is ten times better than the rectangular one.

Still, I try not to be a proponent of change. I will accept it passively, but I tend to avoid doing things that will change my routine or life. As Christmas approached this past year I contemplated Mary and her circumstances in those nine months before Jesus' birth. She was faced with change immeasurably more than any I could imagine, but it was all external. She didn't cause it to happen. And she accepted it with grace, faith, and obedience. I want to be like that. But I don't want to start the ball rolling. Of course, that's sort of silly to think, too, because it's always God who is going to roll the ball (that lovely antinomy of sovereignty vs. free will). I guess what I'm saying is I don't initiate risks to my routine...unless I know that God wants me to.

And there's the rub. About four months ago it became very clear that I had to give Kraig the freedom to start looking into something that could lead to a major change in our family. Hopefully brief overview: When Kraig and I got married, we fully intended to head into work overseas, whether missions or otherwise. Kraig wanted to teach, and with that in mind he pursued a PhD in Civil Engineering. I got a Masters in Teaching English to Speakers of Other Languages. On September 27, 2002, our lives took a huge, amazing detour when Keren was born. Suddenly overseas work was put on the back burner, and we learned a whole new world of special needs. And our hearts grew in ways we could never have imagined. On January 28, 2009, Keren died, and in an instant we were left with a huge question: Are we back to where we were before our detour? Obviously life had changed for us, and at that point we weren't considering any drastic shifts other than adjusting to our new world without Keren. That was enough. And God used even that to show us grace and beauty. But over the past few years, God has been teaching me more and more about surrendering to Him, and letting Him work through me in whatever way. I want Him to shine, and the only way I can do that is to give up my little whims, because really, they don't make me happy anyway. I had to give Kraig the opportunity to look.

All that to say no change is occurring in our family at the moment. There is absolutely nothing definite except the fact that the possibility is there. That's the funny thing, too. What I'm dreading is the change that may come. I have no idea what form it will take, or even if it will occur, but I am dreading it. That in and of itself actually frustrates me because I know from experience that God can and will work out the details, including the state of my heart. I just don't want to let Him do it because it means change.

In the meantime, I'm watching as He's shifting some things around me that mean inevitable change in the lives of some close friends, and as a result in Kraig's and mine and our kids' lives. It makes me wonder if God is shifting those pieces first to get my heart in shape. On the one hand, it strikes me as perfect because it's not me triggering the change; I'm the passive recipient. Just what I prefer. However, once again I dread these changes. I want my rectangular table!

My fears make me want to scream sometimes. I hate being bound by them. I hate fearing change, because I know it's one more thing that separates me from the full joy and peace of a relationship with Christ. And yet there is something in this that is apparently a part of my make-up. God made me with this bent. It doesn't mean I should wallow in it and take it as it is, though. Rather, I need to seek Him, and continually give my fear and frustration to Him--over and over again. And perhaps when I am old and gray I will have grown to the point where I can immediately rejoice in the round table. And perhaps it will take till I get to heaven. In any case, it keeps me leaning on Him, and that, when it all boils down to it, is the best position to be in.
Posted by Loren Warnemuende at 3:33 PM No comments: