A new creature of immense ferocity and evil has entered our little dominion. He is a giant, but not just any giant. He is an incredibly detailed and defined giant, at first indestructible, but I think he might be dead now. I'm not totally sure. You'll have to double-check with my four-year-old.

He emerged from thin air the other morning when I was walking home with Ev and Jon after dropping Clare at school. One house that we pass has stepping stones set in the grass going up to its front door, and my girls love to leap from step to step. This morning was no different, and Ev took off on them, telling me as she went that these were a monster's footprints.

I decided to find out more, so I asked, "Does he have long, gnarled fingers?" 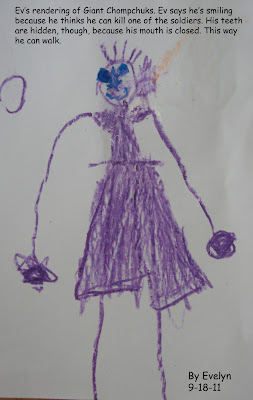 "Does he have a great big nose with hair sticking out of the nostrils?"

"Does he have lots of hair all over his head, or just little wisps coming out of the top?"

"Little bits of hair," Ev told me. "And he has a really big mouth with lots of teeth."

I discovered later that these teeth "went all the way to the ground." The giant's description continued to grow as the day progressed, and even the next day. For one, to give him a size comparison, he's as tall as our ceiling (about nine feet). Also, at first his name was just "Giant," but when yesterday I said, "So his name is 'Giant'?" she clarified, "His first name is 'Giant,' but his second name is 'Chompchuks.'"

The Giant Chompchuks, it seems, has a love for people. That is, a love of eating people. Animals, too, but preferably people. The good news for us poor people, though, is that he only comes out at night, and not only that, he only likes the cold. I asked her if we were safe in our houses, and Ev informed me that of course we were, because it is warm in our houses. He is loud, and when you hear thunder it's probably him, prowling with his fellow giants (yes, there's a whole group of them) outside our windows. She at first said nothing could kill him, but she soon amended this. There is an army, apparently, who fights the Giant Chompchuks and his minions. This army uses swords and rubber slingshots (a la David and Goliath except for the rubber part). In fact, one army guy shot a slingshot stone right through the eye of Giant Chompchuks and killed him. I think this is why he is now dead...but maybe not. You never know with Giant Chompchuks. He has an evil sidekick named "Kangarooey," but the army has a good-guy named "Kangaroo." Very helpful to know. 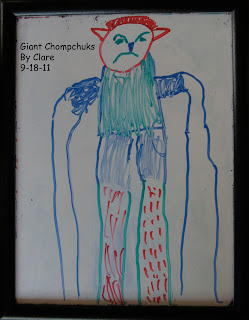 What amazes me about Ev's elaborate and frightening description of the evil Giant Chompchuks is that even though she insists that he is real and she's seen him, she isn't at all afraid of him. He's not causing nightmares, though she claims he keeps her awake at night, and she certainly hasn't shown any signs of worry. Despite all his ferocity, he simply is.

And all this from the mind of my four-year-old. The one who plays with baby dolls, who prefers dresses to pants, the one who mothers her little brother and loves to help out with the domestic details around the house. Of course, she is also the supreme drama queen who lately puts on a great show of tears and tragedy when told "no."

If she can stream her drama a bit more into creatures like Giant Chompchuks, I think I'll let him hang around for a while. Oh look! Is that him lurking behind the pear tree?
Posted by Loren Warnemuende at 6:16 PM 5 comments: