I love stories. I love seeing my kids’ eyes light up when they listen to good stories. And the best stories, I think, are the ones that give a glimmer of something more than. It doesn’t have to be laid out like Aesop’s Fables, “And the moral of the story is...,” but the best stories are definitely the ones that have more to them than a plot-line.
And the greatest story of all is, no question, the story of God’s Big Rescue Plan. Most of us know something of this story, and we hear a good bit about it around Christmas. But usually we only hear one part: Jesus, God’s Son, is born on a starry night and laid in a feeding trough. If we’re more knowledgeable, we know that this baby grows up to do all kinds of wonderful miracles and tell marvelous stories himself, but in the end he’s horribly murdered—for us!—and then, beyond comprehension, rises again!
So if that’s the main story of God’s Big Rescue Plan, what does the rest of the Bible have to do with it? Are the other stories in the Bible just there to give us guidance in how to live our lives (or how not to, as the case often is)? Most children’s books and videos that portray these stories seem to imply this. Two newer contributions to the wealth of kids’ books and videos, though, go a major step beyond the norm and bring out the full beauty and wealth of the greatest story out there. 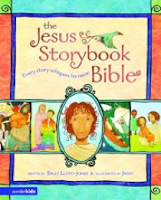 First off is The Jesus Storybook Bible: Every Story Whispers His Name, by Sally Lloyd-Jones. We were introduced to this book in the fall of 2007, and I’ve lost count of how many times our family has read it through since. Colorful illustrations catch the eye of littlest ones, and the creative storytelling grasps the imaginations of kids as young as three or four…and as old as 90 or 100 J . Lloyd-Jones skillfully weaves the truth of Jesus and God’s Big Rescue Plan from Adam & Eve through Revelation. Not every part of the Bible is covered, of course, but each story included shows a connection to Christ. The way she puts things has grabbed my heart more times than I can say. It has deeply affected how my kids see Jesus and heaven, and their place in the big picture. You can find this book at Family Christian Stores, though I’ve found it’s cheaper through Amazon.

Secondly, a new video series, What’s In the Bible?, has been a huge hit at our house this year. The creator of this series is Phil Vischer, otherwise known as “Bob the Tomato” of VeggieTales fame. In these new videos, you don’t have talking vegetables, but rather an eclectic cast of puppets who dig into the Bible and pull out some fascinating stuff. It’s full of the type of humor you find in VeggieTales, along with fun, catchy songs and silly cartoons. At the same time, it lays the Bible out clearly without ignoring some of the tough questions like “What is salvation?” “What is the Trinity?” “Why does God tell the Israelites to kill people? Isn’t He the God of love?” And once again, woven through is God’s Big Rescue Plan. So far six videos have been put out in this series, and they’ve made it through 1 & 2 Chronicles in the Old Testament. It looks like there will be about thirteen videos in the end, and they’re coming out quickly. If you want to find out more about this series, or watch other videos with the characters, check out http://www.jellytelly.com/ and http://whatsinthebible.com/. I just discovered, too, that there’s a new stand-alone video called Buck Denver asks Why Do We Call It Christmas? I want to see it!!!

So there you have it! Quality stuff to check out for the Christmas season. Your kids will love it, and you’ll probably enjoy it as well!
Posted by Loren Warnemuende at 12:23 AM No comments: