Finding the Light Side

Here we are back in the States and once again on the verge of Halloween. Buckets of candy are looming, costumes, and today--carving pumpkins. Two years ago, our first fall in Guadalajara, we had to think through their Día de los Muertos and while we heard that trick-or-treating happened, we had no where to go for it. We ended up skipping costumes (which was fine by me) and per a friend's suggestion we gave each kid some money to choose their own candy from the store.

Last Halloween, our second year in Guadalajara, our friends the Smiths lived in a gated community where trick-or-treating happened. The kids cobbled together costumes and we went out with the Smith's son, Luke. It was Luke's first time ever trick-or-treating and it took us a house or two before we realized there was a song we were supposed to sing in order to get candy. Mexico is happy to take on other countries' traditions, but they're going to put their own twist on them. Whatever the case, great enjoyment was had by all.

Some folks are able to track down pumpkins to carve, but we never got that far. Because of this the kids were thrilled to get pumpkins this year, and this afternoon we had a carving party. The kids are definitely growing up because I didn't have to do much beyond cutting off the top of the pumpkins and digging out the final bits of the innards. I did end up helping Jon, but mostly because the concept of negative space was new to him and he almost cut his pumpkin's giant mouth in reverse. 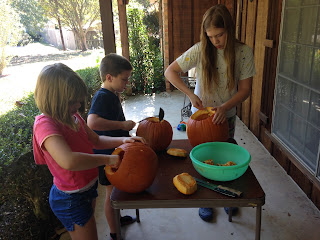 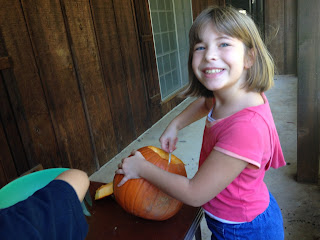 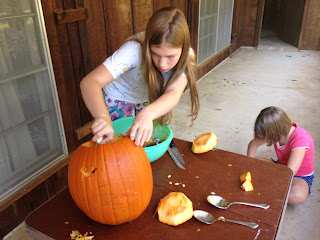 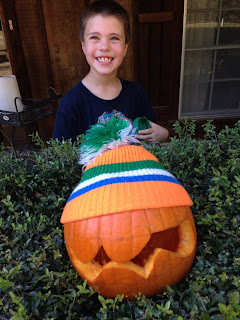 Once the kids found their groove, I wandered the yard picking up pecans. They planned and worked and eventually songs broke out, and ballads were sung to the "brains" of the pumpkins, the stringy orange strands lined with seeds. Ev eventually lapsed into Spanish and sang, "Me gusta tus naranjas, con mi amor"* in convincing tones. It certainly moved me to tears of laughter. 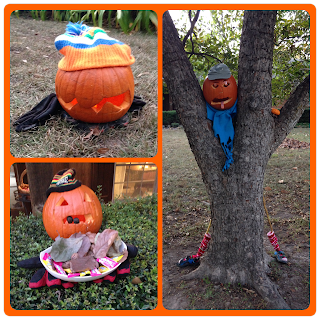 Three jack o' lanterns now grace our porch waiting for their darkness to be turned to light tomorrow night. As Clare aptly put it, "The only way to make the pumpkins truly bright is to take out their brains." We have succeeded. 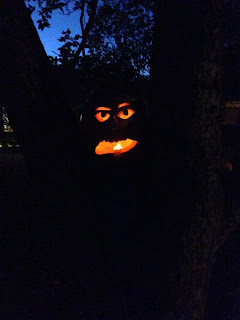 * "I like your oranges, with my love."
Posted by Loren Warnemuende at 11:18 PM No comments:

Pulling It All Together

We've done certain things to make this house homey. The kitchen is in order and functioning, the dining table accessible. The family room and library are inviting. All of the books are at hand--this is extremely important.

Decorations are, on the other hand, a little random. Of course, I suppose they always have been. My mom likes to say she decorates in "Early Eclectic" and I've taken after her in that. Our couch is a hand-me-down originally from my mom's mom. The dining table was a wedding gift from my grandmother and actually new (when we got married, twenty-one years ago), but the chairs were from my dad's side and are probably going on 100 years old. We have paintings painted by Kraig's grandmother, kids' art projects, garage sale finds, and lots and lots of trinkets from around the world.

Right now the trinkets are a complete hodgepodge. They are primarily the items I came across first when unpacking and actually had a place for. Since a lot of the house isn't organized yet, and even the core isn't completely put together. Many things are still packed away. So right now our fireplace mantle has a set of shi shi dogs from China, an angel figurine which was a gift from our neighbors in Michigan, a candle holder from Guadalajara, a pot Ev made from clay at Guachimontones in Mexico, a china plate from Kraig's grandparents (I think), a mini pumpkin Clare got at a fall festival last week, and a carved turtle--probably from Kenya. Don't even get me started on what's in our China cabinet.

Sometimes I look at the hodge lodge and wonder if it will ever come together in a harmonious whole. I see those home design programs and wish I could have a room or two with that kind of unity. But then I look at the things we have and all the history, places, and memories attached to them and I wouldn't trade them for anything.

Now...if we could just get a few pictures up. There's always room for improvement. 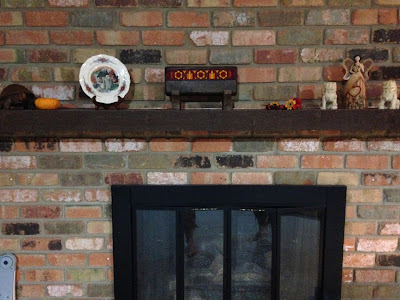 Posted by Loren Warnemuende at 11:19 PM No comments: