Things That Make You Go "Hmmm"

"Americans tend to be problem solvers," said a veteran-professor during our orientation with Global Scholars in July. Danny has been in Nigeria for about 25 years, and he knows what he's talking about.    If something can be done more efficiently, Americans will figure out how to do it. This can lead to marvelous inventions such as a single-handled faucet to control water temperature. It can also lead to some serious head-scratching when we come up against the methods employed in other cultures.

So it is in Guadalajara.

One of the first things we noticed here were insanely high or steep curbs. Our apartment, for instance, has a parking garage under our portion of the building, but we use the one in the section next door because there is no way to get into ours. Why not? Well, the curb is high, and the ramp into the garage is so steep that you would need a monster truck to cross the curb without scraping off the bottom of your car.

"It wouldn't be difficult to shave that down," Kraig the engineer commented. Will it ever happen? Probably not. And we certainly won't complain about this because it means we can send the kids down there to play without concern of cars rolling in, or cars getting bopped by our kids or their balls.

Another head-scratcher is the sink in our utility room: 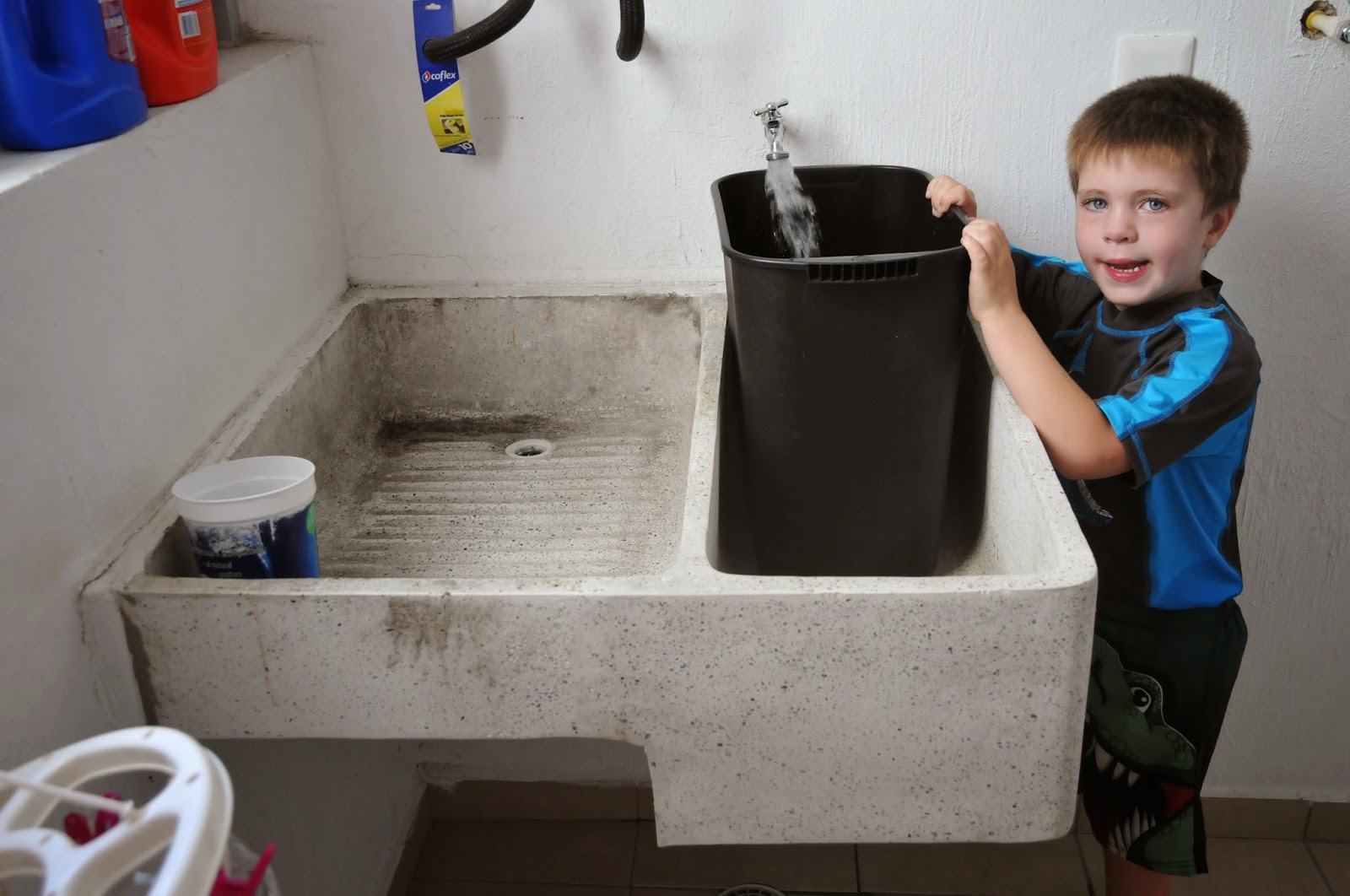 Look at it closely. The faucet runs into the right section of the sink...which is lower than the left section. "So?" you ask. Well, do you see that drain in the left section? That's the only drain in the sink.... And this isn't a fluke. Apartment 1, where we spent our first month, has the same kind of sink. I know it is used as is, too, because one of the apartment staff who cleans the floors always fills the lower portion with water...which we then have to bail out. I'd like to ask why the sinks are made this way, but I'm going to need to learn more Spanish before I can ask the question without sounding like I'm complaining that the sink water is left in there.

And then there is the field next door. The grass and weeds have grown long and lush over the past couple months of the rainy season. 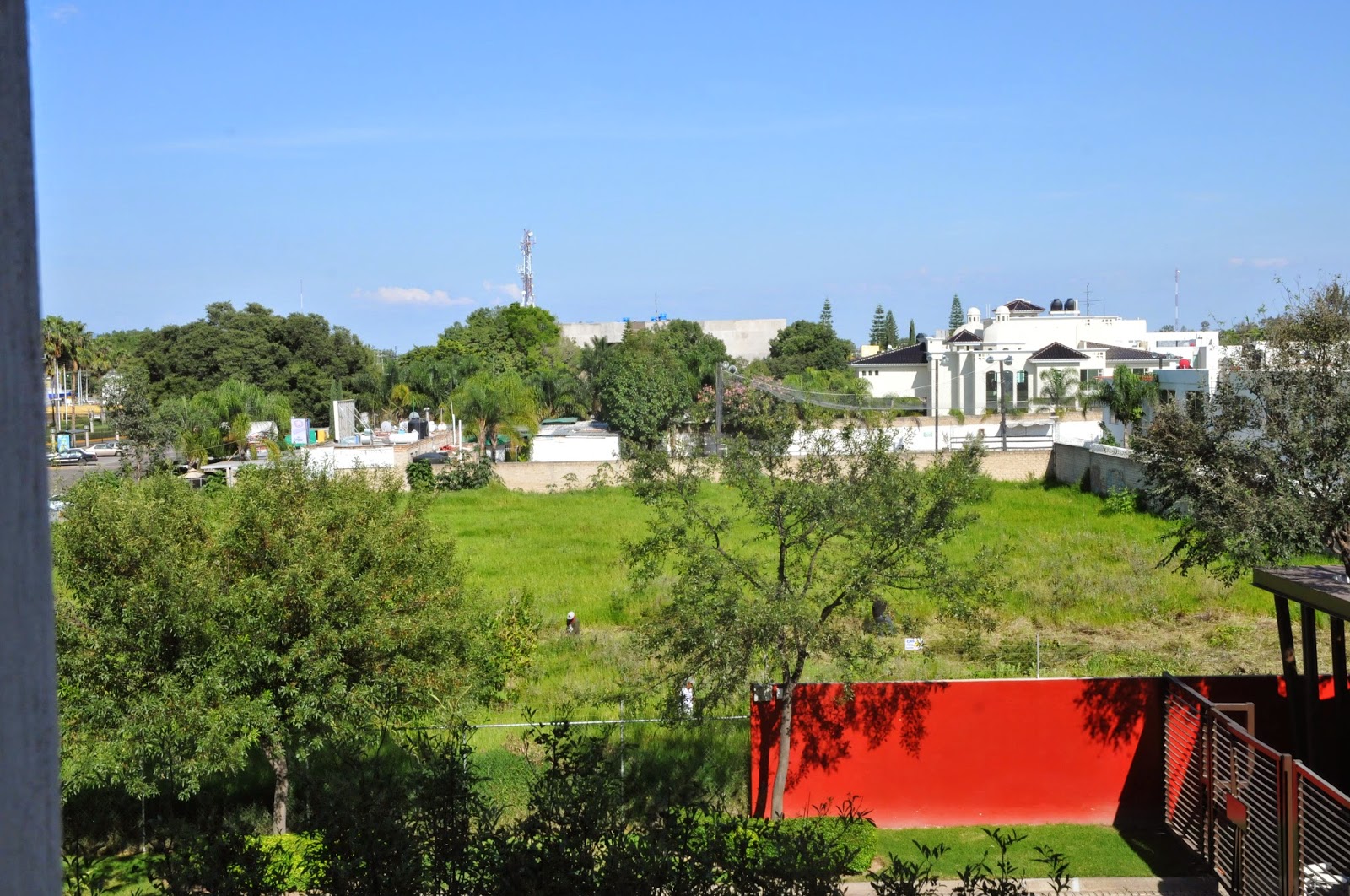 Whoever oversees this field determined it was time to cut the grass, which was far too long and thick for riding mowers or push mowers. So last Wednesday a handful of workers were sent out to chop it down...with weed whippers. 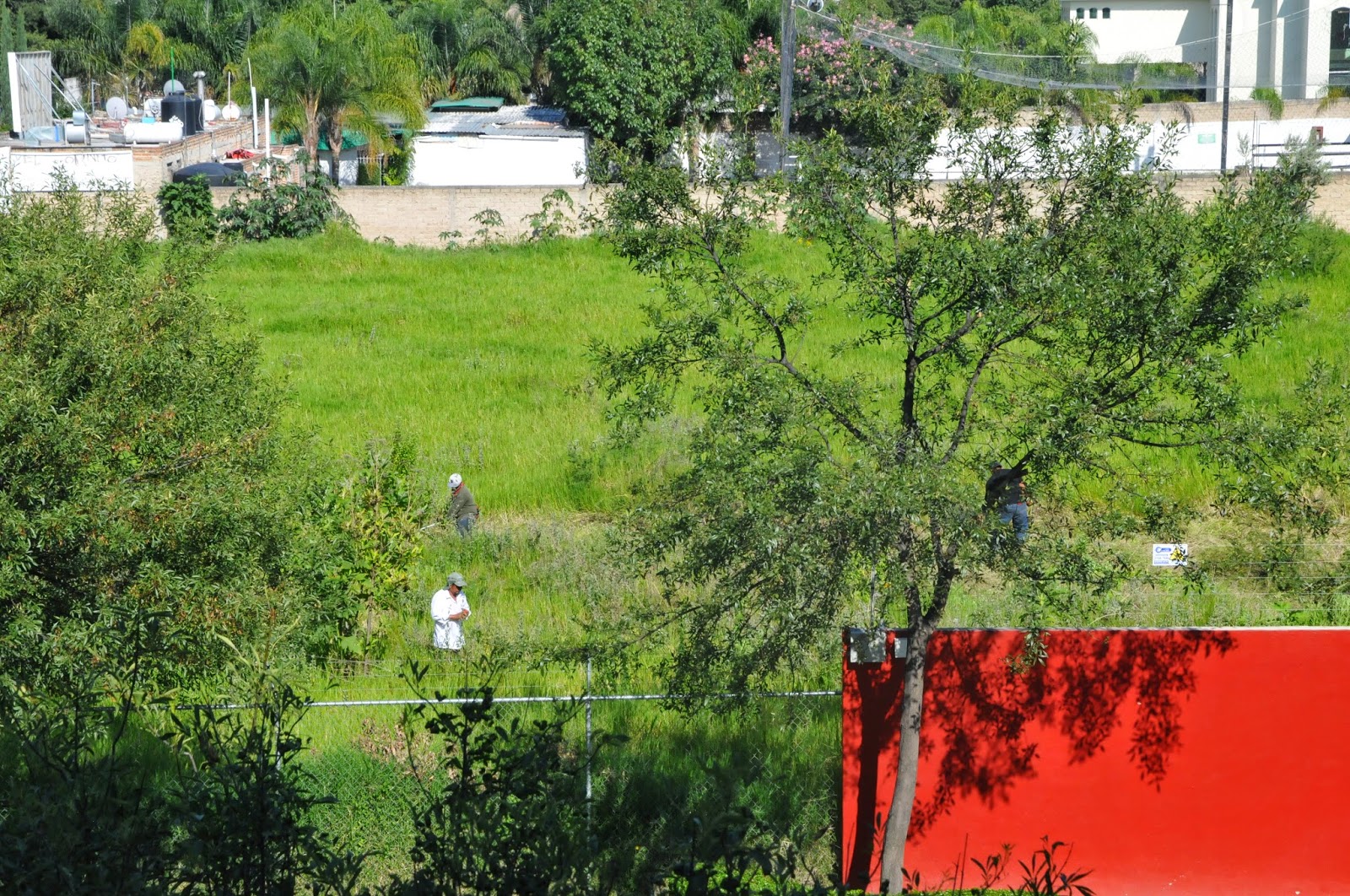 This, apparently, is the standard procedure for cutting grass. 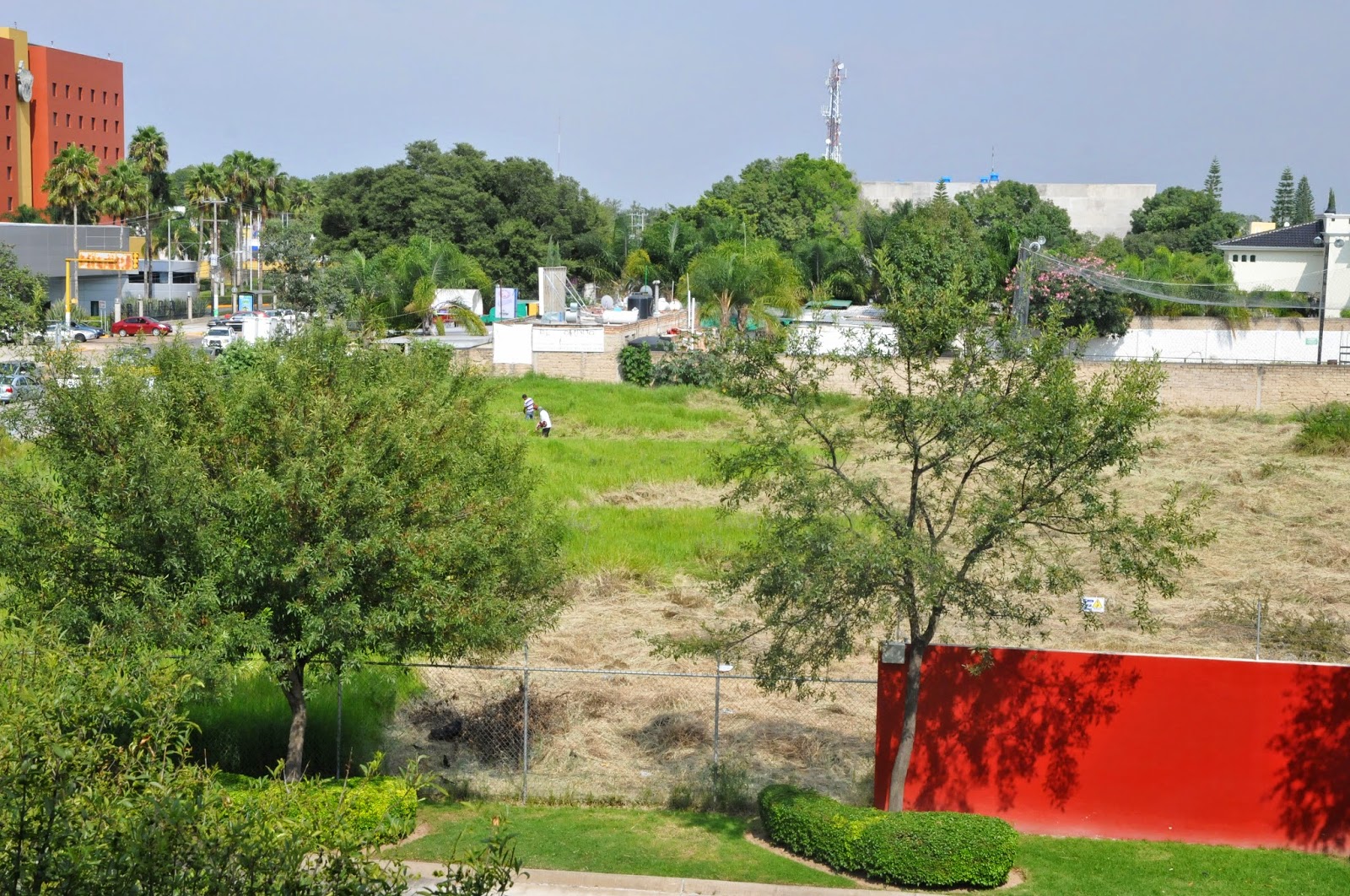 Every day the workers started into their whirring at about 10 or 11, and they didn't stop until about 7. To say the least, unless we closed all of the windows and the door wall on that side of the apartment, I was a frazzled wreck by the time they wrapped things up for the night.

On Sunday, I was sure they'd take the day off. But this was not to be.

They finally finished yesterday. At least I think so. I know I heard a weed whipper for a little while today, so maybe they have some final touches to do. 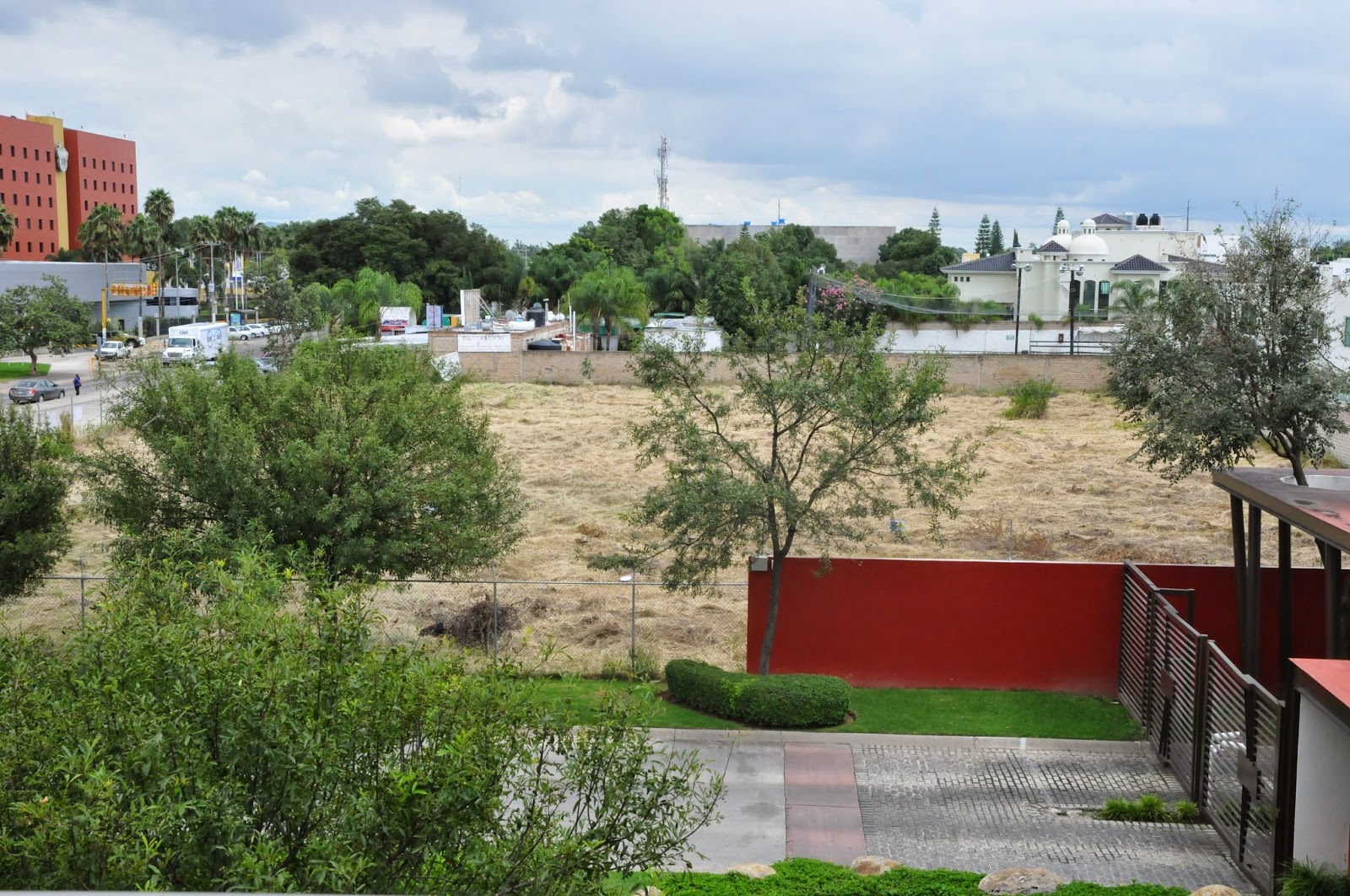 The first day Kraig looked at them flailing away at the tough grass and said, "You know, a machete would make a lot more sense." He told us about two workers going out to clear an airstrip in Central African Republic where he lived as a kid. "They had long blades, like straight scythes," he said, "and they just moved down the strip, swish-swish-swish, and in two days they had finished it. It was quiet, and a lot more energy efficient."

Apparently the Africans are better problems solvers than the Mexicans in this case. Or they just hadn't been given gasoline and a weed whipper.

I'm just praying they won't have to cut it again for a long, long time.

Of course, while we may have solutions, we also have to make sure we don't push our weight around to try to solve everything. Such is the joy and balance of living in a new culture.

To give credit where credit is due, though, the drop-off and pick-up for the kids' school is the most stream-lined machine I have ever seen. Much better than weed whippers.
Posted by Loren Warnemuende at 6:28 PM 9 comments: