This morning our friends the Heathcocks moved away. It's been coming for the past few months, but today was IT, and they are off to new worlds and new adventures. Those whom they've left behind are thrilled for them, because it's a great move, but today there is a big hole. We've been friends for a long time, and in the past four years we've been neighbors. It's not like we hung out a lot; in fact, usually our schedules were so different that we'd only manage brief greetings at church. But I knew they were there. More than that, I knew we could depend on them, trust them, connect with them on deep levels. There was history. There was faith. There was family. Time together wasn't a requirement.

I know I've said before that I hate change. And I hate goodbyes. Yesterday we said goodbye, and it was the same day we said goodbye to Clare's teacher who will probably be moved to a different school in the fall, and to classmates who may or may not be in Clare's class next year. Too many goodbyes for one day. This morning it hit me like a flood when I walked over to Heathcocks' house and saw the door and garage shut, and listened to the moving truck purring in the driveway. "This chapter is done," it droned. It's not just that this goodbye is hard; it's that truth that this is not the first or the last goodbye in my life. It is a goodbye in an ever-increasing list.

Yesterday morning at breakfast Clare and Ev asked again, rather pragmatically, "Why do the Heathcocks have to move?" They are losing a playmate; the Heathcocks' youngest son fit nicely between our Clare and Ev, and often popped over to play, or the girls would ask to go see "if Matthew was available." Jon was starting to refer to him by name, starting to look up to him as an older brother. He was an extra kid, as fun and frustrating as my own. Despite this loss, my kids aren't heartbroken. In some ways it's because the reality that Matthew will not be available hasn't sunk in. However, it's also because they live in the now and so far change hasn't bothered them much.

We talked about why Heathcocks were moving, and how it was such a great thing for their family. "I don't ever want to move," Clare said. "Yeh," I answered, "but if God wants you to move then it's so much better to go than to stay. You'll only be unhappy if you aren't doing what God wants you to do." And I knew as I spoke that I was reminding myself of this as much as telling my daughter. "If we do what God wants us to do, then He can use us to touch the most people possible so they might come to know Him. And that's the best thing of all, really, isn't it?" Clare nodded, though at almost seven she's not grasping the full weight of all of that. For that matter, I'm still trying to grasp this truth.

And so, today I am saying goodbye with a heavy heart. I know in my head that there will be new hellos tomorrow, and new adventures for our own family. But I can't help but look forward to my Heaven-home when there will be no more goodbyes. 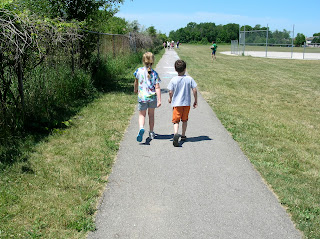