I do not know Spanish. 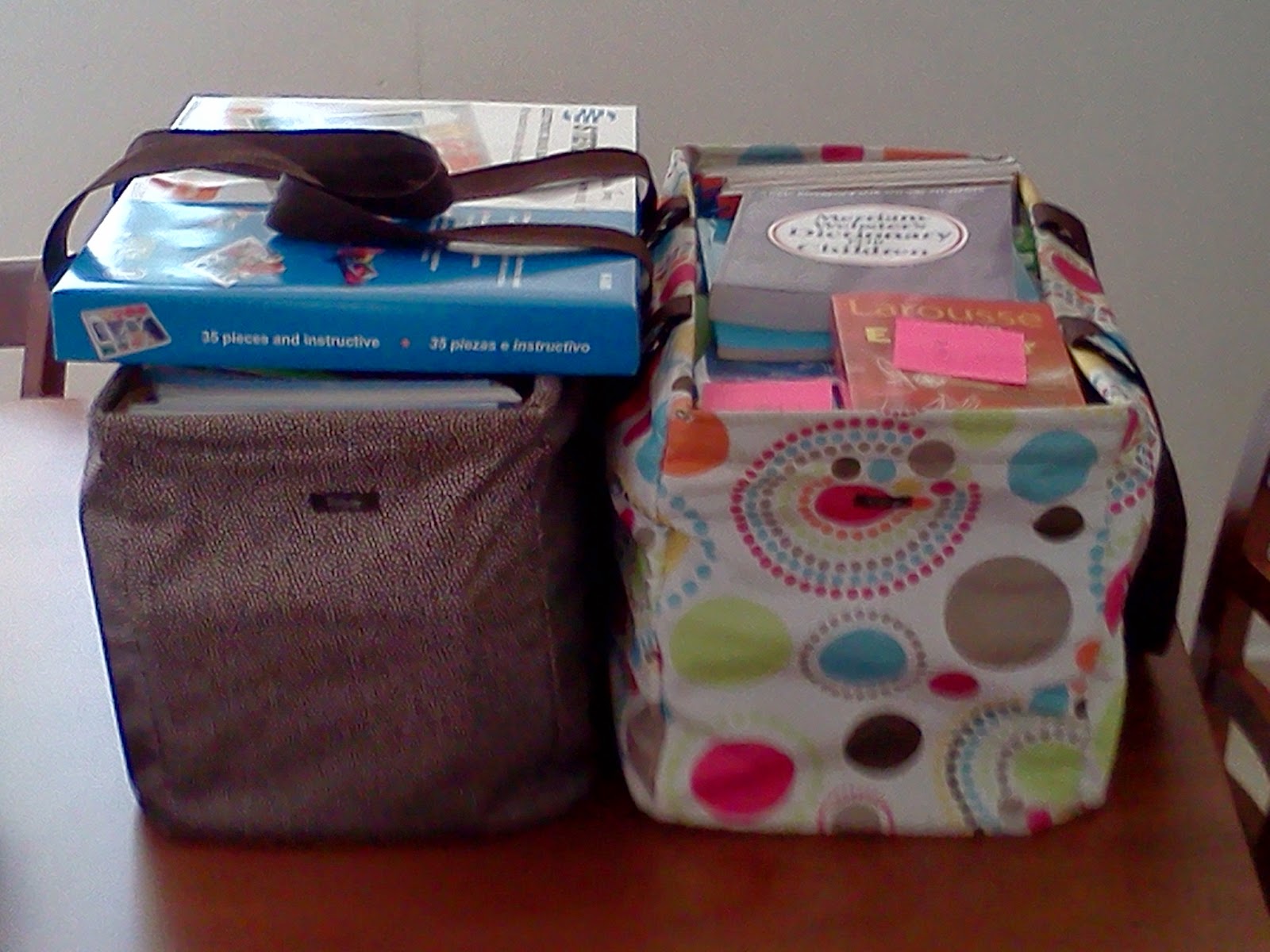 I can boast of lots of language exposure, and I know a lot about how languages work and how they affect culture, but I am not fluent in any language.

And now we are living in a country where Spanish is key to survival. Sure, there are plenty of people who know English, but even then there are times when things are easily misunderstood because of the way language works, assumptions that are made, and there are unfamiliar cultural procedures. If I use Google translate to figure out how to say, "Can you show me an example of this?" I may be using words or turns of phrase that are not used here, and I certainly won't follow the whole response given.

We realized this full-force as we entered the education system for the kids. Not only was their registration a full-onslaught of sticker-shock (How much does a uniform cost?), but since it was all in Spanish I had to go through things line-by-line to try to translate. I ordered the uniforms and books online, then got the school supply list printed so we could start our collection. 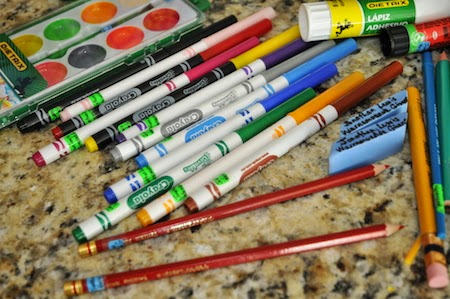 When it came to the school supplies, I tried to be thorough. One evening new American friends came for dinner, and I had Jeannie sit down and go through the list with me. She's a teacher here, so has more experience with the system, plus she knows Spanish. I learned a few vital details from her, such as when the instructions say "label all items with the child's full name" it means all--every pen, every crayon, every eraser. And when they say "child's full name" this means first name, middle name, last name, mother's maiden name. Do that with "Warnemuende" a few times.... 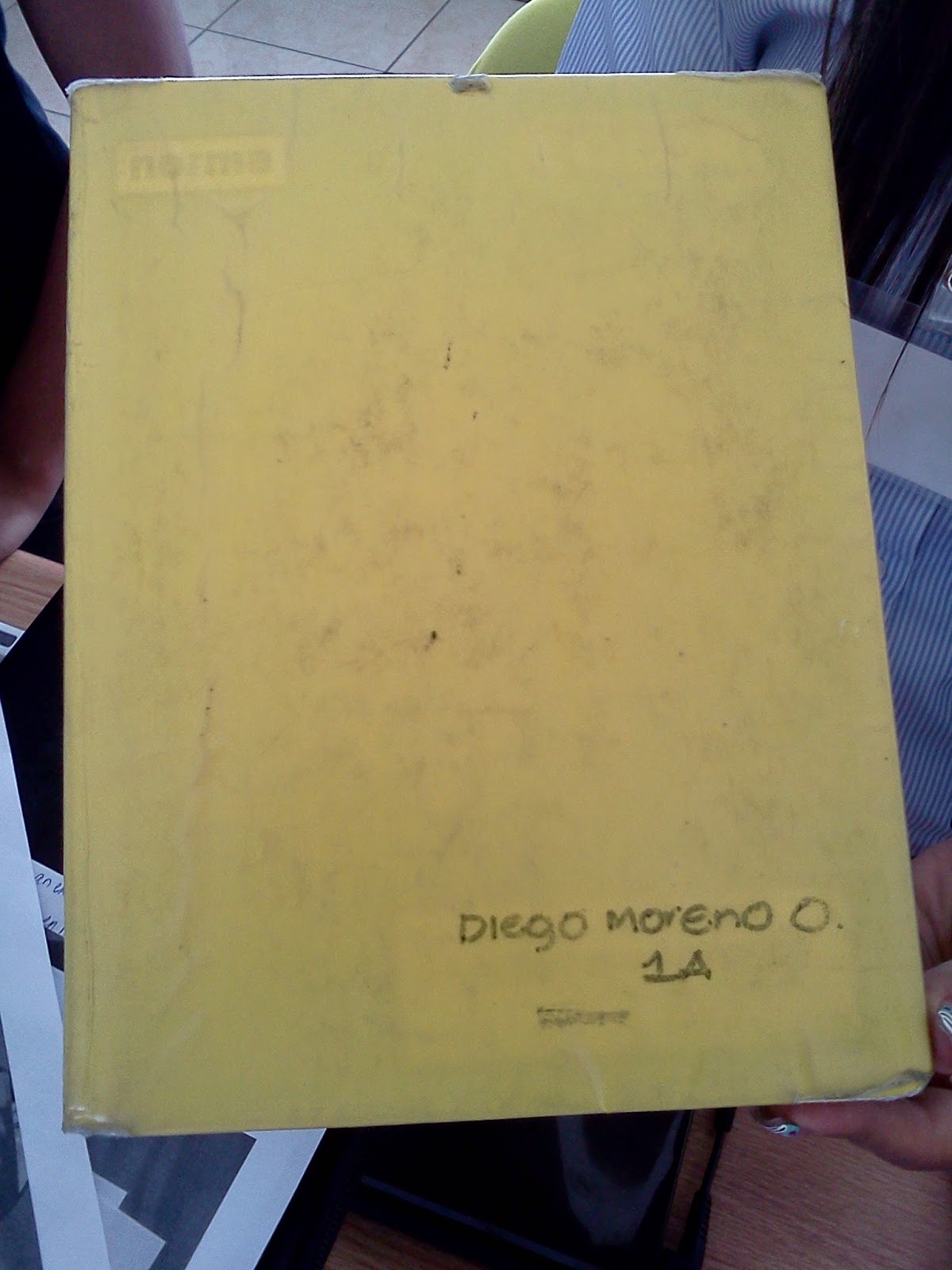 After these delightful discoveries, I still needed to clarify a few items on the list. Each child needed multiple notebooks (a particular style, which, we discovered, costs about three times as much as your typical spiral notebook) and these notebooks needed to be covered with certain colors of paper. We now have a lovely collection of colored paper that I plan to use for gifts down the road. Oh, and don't forget clear contact paper, too.... Anyway, armed with my questions which I'd figured out how to ask in Spanish (I hoped) I went into the office at the school. The staff is very helpful, and some know more English than others. We played a fun game of "find that item" so they could show me examples of different things. Once this was accomplished, the kids and I started our hunt at stores in the area. Supplies were bought and stashed in the cupboard, waiting their colored covers and name tags. 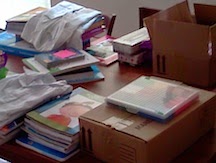 Well, the other week we were told our school order had arrived, so I went into the office to get them. The uniforms were delayed, I found, but we did have books...a few piles (How will they get through these texts? I don't know. That's a story for down the road). And we also had--Ta Da!--school supplies!!!

There, neatly organized and fully labeled in two beautiful boxes were all of Clare and Evie's school materials: the notebooks, the rulers, the pens, the pencils.... Everything was there, covered and labeled. Apparently these items were included in the list of books that I had ordered online, but the staff had only noticed this the previous day. There was much apologizing that they had just caught this, and Jon still needed his items, but there it was. It was done. 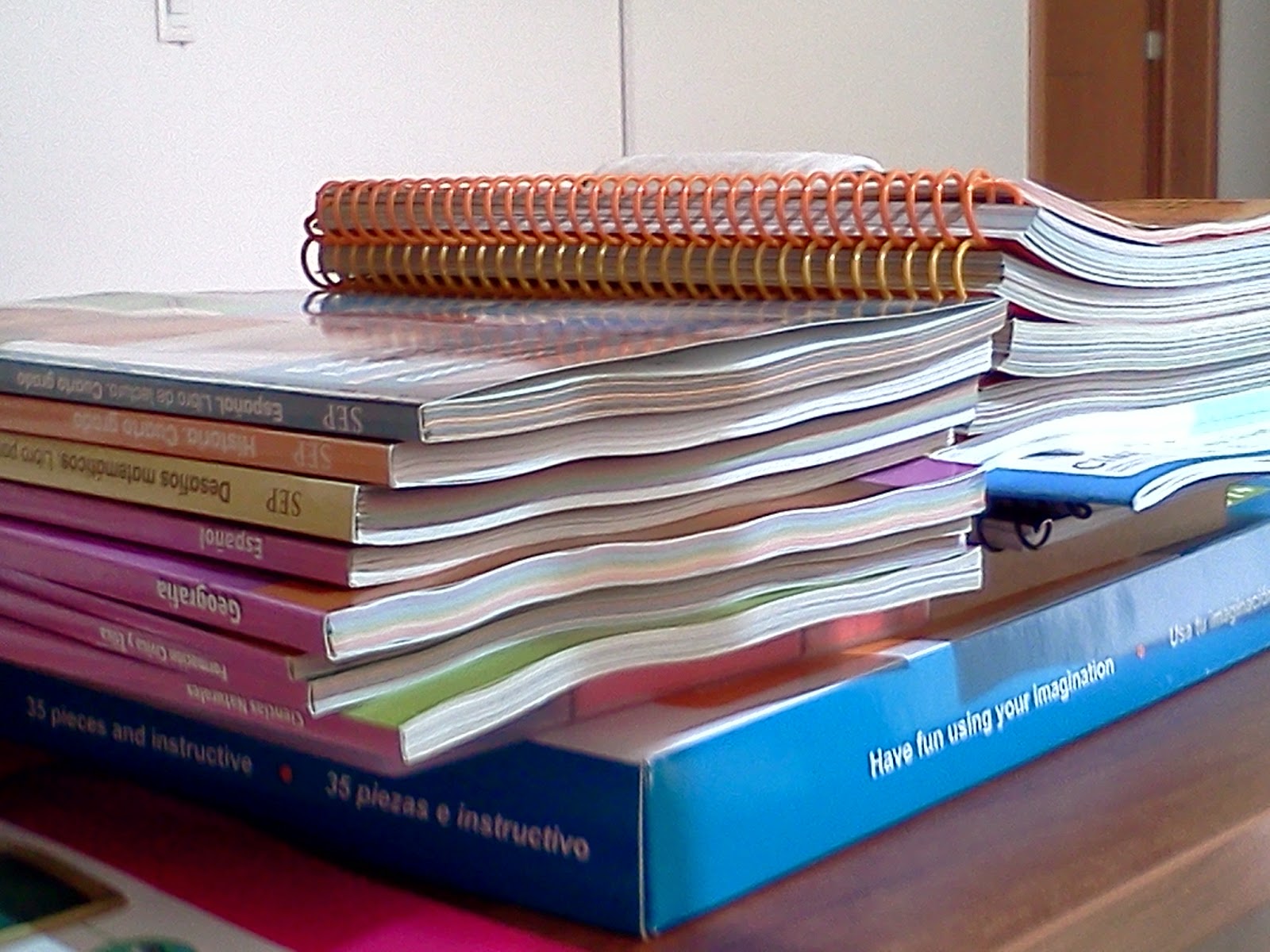 To say the least, it was one of those moments where I had the choice to laugh or cry, and thankfully God helped me take the laughter route. I kept thinking how much money we'd spent--Yikes!--and the fact that Kraig's paycheck was still nonexistent, and that I'd heard it was often hard to return items here. But still, laughter was the response despite the frustration. It was so obviously a miscommunication involving language, assumptions and culture. Evie kept asking why this all had happened--she was almost in tears, poor girl--but we managed to see the bright side. We'd learned a lot of Spanish vocabulary and we'd learned the area better as we'd traipsed to different stores.

We headed home with our supplies in hand and I pulled all of our purchased stuff out of the closet, thanking God that I'd only covered one of Clare's notebooks and nothing had been labeled. We sorted out a few things we needed to keep for home or had already opened, then I pulled out receipts and bagged the returns. While home, my sister-in-law called and we got to chat for a good long while and she let me vent (and laugh). As we wrapped up, she said, "Hey, let's pray about this now," and she took our situation straight to God to handle. Smart woman . We said goodbye, and the kids and I headed back to the three stores to do returns.

And we did it! Each store took our items back with no questions, and handed me cash refunds so we didn't even have to deal with in-store credit. We also were able to knock off a couple more of Jon's needed items and we got a bunch of groceries. Thanks to my sister-in-law's encouragement and prayer, there was no question in my mind that God had helped us in the process.

This won't be the last time this happens, I know. Stay tuned for more cultural faux-pauxs.
Posted by Loren Warnemuende at 1:17 PM No comments:

One year ago today I wrote a blog post about the death of my friend Joann, and death in general.

It's not just because Joann died, or that the death of others has occurred in the past year (which it has) and more people have gotten cancer and other horrible diseases (because they have). I haven't succumbed to any great depression or given up on God--far from it.

It's actually more because so much life has happened in the past year that for one, there hasn't been much time to write posts for the world to see ('cause you know the world is watching :) ). The other reason is that we have been on the path of a huge family transition which meant a major job-change for Kraig and we didn't want to make that known to his employers too early ('cause, of course they're all reading my blog. Oh. Wait.).

But now life has shifted and things are falling into new routines, and I've had some posts running around in my head that need to come out. But I thought I should write some sort of transition post before jumping into this whole new world.

We are in Guadalajara, Mexico, and least for one year, and who knows what all will happen.

Life is happening whether we are ready for it or not. 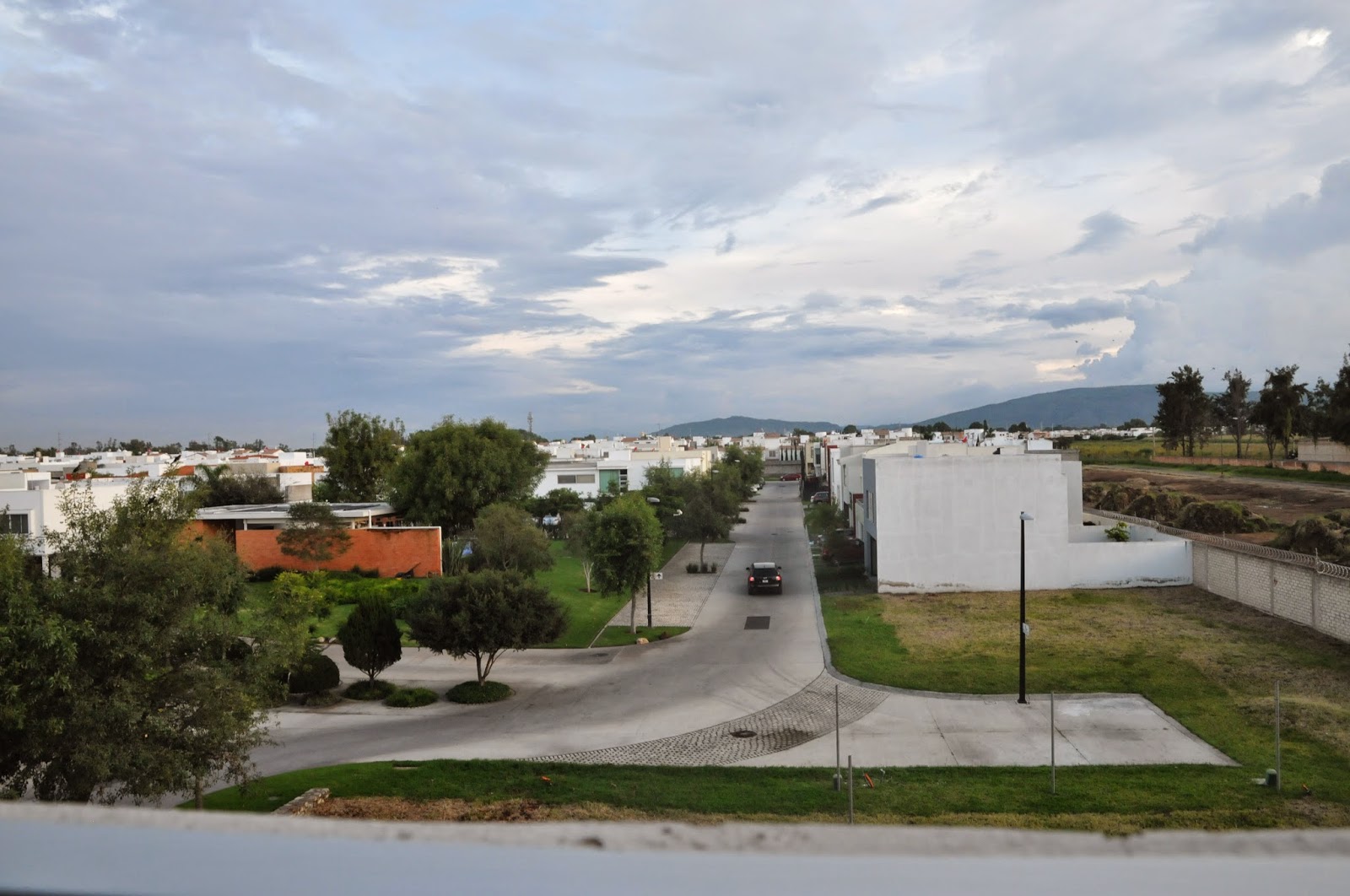 Posted by Loren Warnemuende at 11:32 PM No comments: