Since Valentine's Day Was Last Week....

Valentine's Day is not a big deal at our house for a few reasons, but in recent years, this year particularly, it brought little to no pleasure for me. I'm not a Valentine's Day hater or anything; in fact, I give it more weight than most "Hallmark Holidays" because it actually has a history that dates back to Roman times and the early Christians. For this reason, I'm letting it stand on our calendar.

But there a few reasons why we don't make it a big deal. I could blame it on my Dearly Beloved, who is not a romantic. I'm not being sarcastic when I call him "Dearly Beloved," because Kraig really is that. I am blessed with a husband who I can trust with my life, who loves me despite all my foibles, and who does everything he can to support our family and be a great dad. More than that, he deeply desires to do God's will in everything, which gives him first place in my view. But romance and special occasions are not his forte. Once in a long while he blows me away with something amazing, but after almost seventeen years of marriage, and three years of dating prior to that, I've come to expect that as the exception, not the rule.

Really, though, that's not the only factor. As much as I'd like to think I'm a romantic, I'm not. Practicality always wins out. Yes, Kraig could by me flowers, or chocolate, or a lovely card, but then what? I'd like the flowers, but they'll wilt and have to be thrown away. The chocolate would be yummy (and he'd know to get good, dark chocolate, too). But do I really want more candy kicking around the house? And the card would be a lovely sentiment, but do I keep it forever to add to my ever-growing pile of papers, or do I toss it? I won't even mention a costly dinner out with a babysitter and what that would do to the budget.... Yep, don't like that thought.

But then this year there was one more thing that just about put me over the edge: the valentines needed for my kids and their programs. We had five occasions that required valentines this year, and two of those also required a covered shoebox, one fully-decorated. Clare and Ev, for educational purposes, had to address and sign their valentines. This is good practice, but it meant a week of little stickers and valentines that had to be brought out and then put away until all were done and put in little bags to be sent to school. Then, once the class parties were over, there was the question of what to do with all those not-so-dear valentines brought home that, heaven forbid, we throw out! I won't even go into the fact that this also meant more candy coming home which then has to be dealt with.

To say the least, I knew when February 14 rolled around this past week, I'd better come up with something special for us to do or I'd wallow in self-pity and loathing for the whole day. 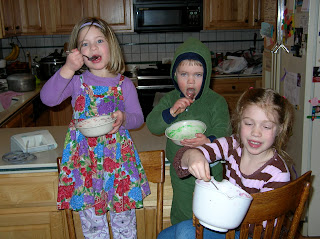 So Evie, Jon and I made a cake. Cake-making, in this house, is a special treat. I like to make cakes that taste good, and I think those who have had them would agree I typically succeed. Ev loves to help (and Jon thinks he does), so it's a great chance to help them learn things like mixing and measuring. There's also the added benefit of licking spoons and bowls afterward, which Clare got home in time to take part in :) .

While I can make a truly delicious cake, decorating is not my strength. We started with a delicious buttercream frosting, so no problems there. Color and design, though, always are a problem. Ev and I first thought we'd work with a palate of pink, red, and white, but then we saw raspberry on the back of our food coloring box and decided to try that. The result was rather more purple than we expected, which put a damper on creating red hearts for decoration. So we made our red into a darker purple...with limited success. The bright green helped a bit, but you'll have to judge the results: 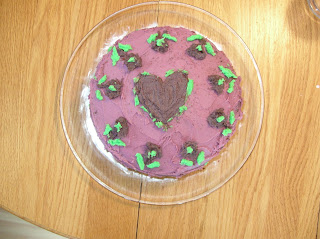 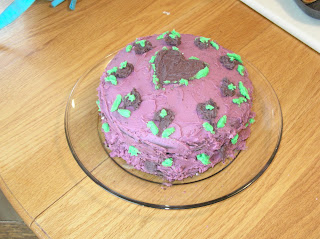 I can assure you, though, that it tasted marvelous. The fact that I added an extra ounce of chocolate to the batter didn't hurt either. 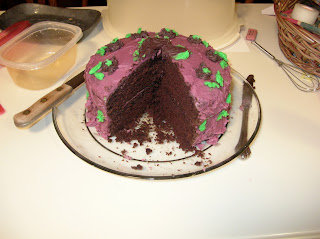 The kids approved the whole process, and my Dearly Beloved and I have enjoyed the results this week, too. 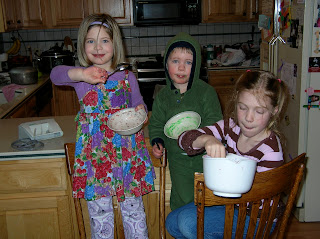 So while I'm still a Valentine's Day cynic, at least we had something that made this week a treat.
Posted by Loren Warnemuende at 1:12 PM 3 comments: