You know how parents groan when some well-meaning (or conspiring) friend or relative blesses their child with a "noisy toy"? One of those with all the electronic bells and whistles and obnoxious songs that play over...and over...and over.... I've heard many new parents declare that their children will only have non-electronic toys and the first bell or whistle that comes through the front door will find its way quickly out that back. That usually lasts until the first said toy appears and junior is completely enthralled by it. 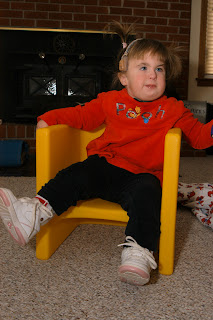 But anyway, one of the earliest things that Kraig and I discovered after we had Keren, was that the best toys for her were the noisy, moving, light-up affairs. They helped stimulate her, and we could usually find things that she could manipulate and get going. She loved the lights, the vibrations, the sounds. As a result, when birthdays and Christmas came around, friends and family would go all out to find her toys like these.

On one of these early Christmases, our friend Jodi gave Keren a "Bounce & Pounce" Tigger (or something like that). All you had to do to get it going was pinch the tip of his tail. "Let's bounce!" he'd say, and a snip of "The Wonderful Thing About Tiggers" would play while Tigger jiggled on his four legs. Then, "Even fasterer!" he'd cry and do the same bit faster. Finally he'd say, "I think I over-pounced," and that was that. It was cute, and Keren could get the tail bit which was cool, but we did think it was a little low on the output for the fancy toy it was. The box didn't enlighten us further, though, so we figured that was it. Keren liked him--she'd grin when he'd play and vibrate--and that was what mattered most.

And Tigger has remained a part of the family since, making his way through the hands of many small children and loved on more or less, depending on the child. He's just one of those that hasn't been put away or removed from the over-population of dolls and stuffed animals that reside in our home. A few months ago he was one of Ev's favorites because Clare's favorite stuffed pet was a lion. More recently he's been one of Jon's particular buds. All this time Tigger has played his little bit and still jiggles and shakes; we've never even had to change the battery.

The other night as Kraig was reading to the kids, Jon was "listening" as he sat there biting Tigger's tail and making him play his tune. We ignored it for the most part; after all, Tigger's tune has become one of those background noises we don't really listen to any more. Suddenly, though, Kraig stopped mid-sentence and said, "Jonathan, what are you doing? Are you trying to destroy Tigger?" We looked down, and there sat Jon studiously pulling at a piece of flexible plastic that now stuck out from Tigger's underbelly and battery case. I reached over to take Tigger and see what Jon had grasped, and as I peered at it I realized the plastic strip had words on it: "Pull out after purchase for full play mode." By this time we were all focused on Tigger. "No way," I laughed. "We're just seeing this now?" I took hold of the strip and pulled it out. In wonder and anticipation, bated breath on my part, I reached out and squeezed Tigger's tail. After all these years did Tigger have more for us? 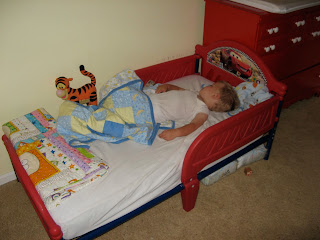 And he did! No bit pieces of "The Wonderful Thing About Tiggers." Tigger let loose and played the whole tune once through, jiggling away. Then he paused and said, "Let's try even fasterer," and he stopped. Was that it? I cautiously pinched his tail again and he took off "even fasterer" for the whole tune. There were a couple other phrases thrown in that we'd never heard before, and we laughed and laughed at the sheer silliness of it all. Keren would have loved the crazy thing, and Clare, Ev and Jon were loving it now.

So now when Tigger's tail gets pinched (and of course, over the past few days it's been pinched much more than usual) he plays a full rendition of song and bounce. And Kraig and I have learned for the zillionth time that this parenting business is never a worn-out tale. You never know when you're going to discover something amazing that's been under your nose for years.

Actually, I have been writing a good bit this summer, just not on the blog. This has been the summer of travel, and I was able to keep a journal during our trip to Oklahoma earlier this summer, and I'm finishing up writing memories down from our recent trip to Boston and New Jersey. I had thought maybe I'd take parts and put them into the blog, but so far it hasn't worked out that way.

But I just finished reading a book that I'd seen recommended by a number of people in recent months, If You Want to Write, by Barbara Ueland. It's a fun read because the author is a character. She says exactly what she's thinking, and it doesn't matter that I don't agree with all of her philosophies. It's easy to sort those out and find the nuggets that are true because she's so straightforward, not to mention interesting. And as I do want to write, I have found a lot that I could take home.

For one, she emphasizes that when it comes down to it, every person is "talented, original and has something important to say." The problem is that we tend to either exalt ourselves in our own eyes and so come off sounding like conceited prigs, or we downplay everything we are to the point we become dull as old knives. Neither of those are qualities God desires in us. In His eyes, we are talented, original, and beautifully important--we don't need to prove anything. So, if we desire to write (or paint, teach, sing, research, engineer--anything!), then write, and write what we feel, think, etc. It doesn't matter if no one reads it. If it never gets published, who cares? Get it out!

I needed that encouragement, because writing for me is such a great form of therapy. It helps me get thoughts organized, I feel like I'm using my creativity, and as a result, other things get done better. I'm more on task with home projects and I'm more patient with the kids. There are so many times that I've started to write something and God opens my eyes to truths about Him that I wouldn't have grasped if I hadn't put my questions out there in print. And as a result I know better how to deal with a problem, or God just becomes so much more real to me.

My absolute favorite chapter title was "Why Women Who Do Too Much Housework Should Neglect It for Their Writing." I wish I could say the doing "too much housework" was one of my faults, but despite that, I love Ueland's point. She talks about how we give ourselves up for our families so much that we neglect ourselves, and when we don't feed our own passions (the good kind of passions) we end up hurting our families.

"And that is why I would say to the worn and hectored mothers in the class who longed to write and could find not a minute for it:

"'If you would shut your door against the children for an hour a day and say: "Mother is working on her five-act tragedy in blank verse!" you would be surprised how they would respect you. They would probably become playwrights.'"

So I plan to write, whether here or elsewhere. And something will come of it, I know: God will use it to mold me more into whom He desires me to be, and because it is a joy for me, I will blossom, and I pray my family will, too. What better purpose is there than that?