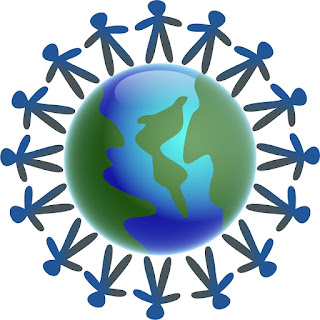 I think I'd go a little stir crazy if I lived in a completely monocultural community. Having grown up in a missionary family, and being married to a fellow missionary kid has certainly formed my viewpoint, but there it is. Throughout our lives our homes have had people in and out who come from different countries, or have worked in other parts of the world, or who are from other parts of the country. In our home the world is never small...and yet you never know when you'll run into someone who knows someone you know.

Of course, sometimes one needs to search a little for the multicultural. Canton, Michigan, is incredibly diverse culturally, but even there there are pockets of folks who were born and raised in Southeast Michigan, and so were their parents and grandparents. In Guadalajara we were the unusual ones. Naturally we met a lot of others not from Guadalajara, but the overall culture is not diverse. Here in Longview there are generations of folks who have lived here, like one of the librarians who told me she thought Longview was one of the beautiful places in the world though she's never actually lived anywhere else.

For us, though, Longview is multicultural. For one thing there's the large Hispanic contingent which often make me feel I haven't really left Mexico. And then at LeTourneau there are staff and students from all over the globe. The prof wives I met hail from all over, which makes for a great mix. And then one of the moms I've connected with through the homeschool group is Russian. She and her son who's Jon's age were over this afternoon and it was so fun to talk food and culture and world with her.   And of course, Longview itself is a new culture for our family, so we can be the strange newbies for a while...or forever!
Posted by Loren Warnemuende at 12:24 AM