Back in February, before the world turned upside down, my daughter Clare painted a picture for our local art museum’s student exhibition. Using watercolors, she painted a pair of hands holding the world. The globe is almost like a soap bubble—slightly transparent, and Clare worked hard to make the hands realistic.

When she first showed it to me she had titled the piece “Earth’s precarious state.” Knowing Clare, and knowing the family culture that surrounds her, I pushed back on her title.

“Do you mean this seriously or facetiously?” I asked.

“Facetiously, of course!” she said.

Clare has been washed with this concept from birth. Both Kraig and I come from Christian families. We believe the Bible is true, that God is Sovereign, that our sins and failures are forgiven because of Christ’s death and resurrection, and we try to live our lives in grateful response to this truth. We also come from missionary families for whom the world has always been a place of wonder, and people from other cultures can teach us a great deal about who we are and how God works in various parts of the world. In addition to these influences, Kraig is a civil engineer who lives and breathes structures and soils, yet he looks at these from a biblical worldview.

Kraig often sets up this analogy:

Many people see the world as something balanced on the tip of a finger. It’s spinning away like a basketball, but the slightest shake, shift, or touch will knock it off balance and it will—most likely—fall. This is a predominantly evolutionary view. If everything has been created by chance, one misstep will mean failure rather than success. In this scenario, the environment is a tragedy waiting to happen, and humans are the primary cause of its destruction. 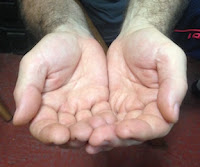 But there is another paradigm (When Kraig describes this he cups his hands like the ones holding the globe in Clare’s painting). God created the world; he is the first engineer and he knows what he’s doing. He created a system that works together, and though we have horrendous ramifications because of the Fall, the world is still secure in his hands. After all, God knows how to design things so they don’t fall apart. The world wobbles and shifts and changes, but it is held secure in the bowl of God’s hands. It’s not going to fall out.

That’s not to say we just sit back and watch this world turn (and wobble). Our God-given job is to be responsible stewards, both in our care for the environment and our care for each other. I remember my mom talking about Lake Erie in the seventies when it was heavily polluted due to industrial waste. It seemed irrecoverable—it was evidence of humanity’s horrific treatment of the earth. Yet humans took measure, stepped in and made changes, and the lake was restored. I’ve camped by it and have swum in it. Irresponsibility was replaced by good stewardship, and something people thought destroyed was restored.

The past few months have thrown the world into chaos. The Covid-19 pandemic isn’t an environmental fiasco; if anything it’s a perfect example of natural tragedy that occurs in our fallen world. We have human responses to it, for good or ill. It’s not as clear a fix as Lake Erie, at least from this perspective. Lord willing an effective, safe vaccine will be discovered. But that won’t be the answer to everything. Hundreds of thousands will still have died, our economies will struggle, mayhem will thrive, and life as we have known it will shift. In the past couple weeks, we’ve seen more upheaval as our nation grapples with how we can be just and loving to each other no matter our ethnic roots. The world seems pretty precarious. These days I constantly wonder if I’m doing or saying the right thing. Should I wear a mask? Am I unknowingly spreading contagion? Is it right or wrong to keep my thoughts and feelings to myself?

I didn’t think I was very stressed, but I realized the other week that my shoulders had knotted and my neck tightened causing a splitting headache. It was a wake-up call that stress was busy working beneath my skin. I have had to step back and mark it for what it is and figure out how to work with it and give it up to God. I have my small sphere of influence, but I am not in control.

Because the world is cupped in God’s hands. We are secure.

Posted by Loren Warnemuende at 1:52 PM