Light in the dark 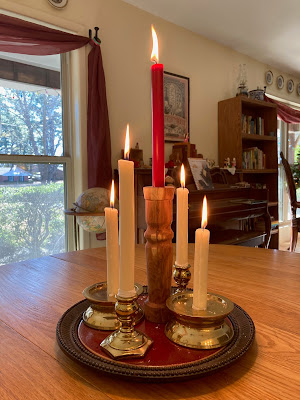 A few Sundays ago we sang Christina Rossetti’s classic carol:

In the bleak mid-winter

Snow had fallen, snow on snow,

In the bleak mid-winter

This year those words fell more solidly than usual.  Even though we live in Texas where snow doesn’t fall on snow, water isn’t like stone, and the earth isn’t as hard as iron, I know what that kind of winter is like.  Rossetti’s words capture the bitterness of it.

Of course, even as we sang the niggle of Real History nipped at me.

“You do realize Jesus probably wasn’t born in the midst of winter,” said Real History.  “And even if he was, the weather of a Judean countryside isn’t exactly like England in December where Rossetti penned these words.”

This year, though, Real History didn’t hang around long.  The words and the images of the song were too strong, especially as I looked toward the front of the sanctuary where the Advent candles flickered, beating back the dark of 2020.

After all, there’s a reason why early believers decided to place Christ’s birth at the darkest point of the year.  There are times when metaphor is necessary to convey truth.

This year Kraig, the kids, and I created our own advent wreath.  It’s nothing fancy, and we didn’t go by a traditional color scheme.  We lit each of the candles at the right points in the Advent season, but we didn’t do traditional readings.  Instead, we simply lit them with the word reminders for each week:  Hope.  Peace.  Joy.  Love.  Christ.

It turned out those words were what I needed this year.  I could focus on those single words without the paraphernalia and busyness of the Christmas season.  I’ve returned to them as more and more of the world seems to unravel in this dark year of 2020.  They have been lights in the dark.

I keep hearing talk about how 2020 is almost over.  It’s as if something magical is expected to happen on the stroke of midnight January 1, 2021.  As a result, I’ve found I’m mentally preparing for what I know to be true:  There won’t be a big change.  We’ll still be dealing with the fallout of 2020 and working to move forward.  I’m not trying to be cynical, just realistic.

The problem is, despite my realistic take I have to fight my tendency to live in anticipation of the next thing to come crashing down, because bad things keep happening.  On the Sunday before Christmas another unexpected piece broke when our church leadership announced that a beloved pastor in the church had resigned due to moral failing.  In the midst of the shock and grief, the quiet disillusioned voice whispered, “Of course.  You didn’t expect everything to keep going well in your church, did you?”

But it’s already not been “well.”  The thing is, I thought the “not well” was only the upheaval of 2020 with diverse responses to Covid.  That has been upsetting enough.  It’s hard to come week after week and not know if acquaintances have disappeared because they’re attending online, or if they’ve pulled up and moved somewhere else.  When I know someone is gone I wonder why, and I wonder how I will talk to them when I see them, or if I should ask them about their decision.  I thought that was the extent of the navigating.

With this latest blow, I’ve realized we’ll be entering 2021 with even more to work through.  There will be much deeper wounds that need care and more healing needed than dealing with losing friends.  Kraig and I have been through turbulence before in other churches, and we aren’t going anywhere now.  Our default response to upheaval is to latch on as tightly as we can and navigate through it.  We’re praying that we can do that alongside our church and our pastor who’s resigned and his family.

So yeah, no magic solution to the darkness of 2020 will occur as we slip into 2021.  Rather, the way seems to get murkier and crazier.  The earth is as hard as iron, the frosty wind moans.  The snow is pretty at first, but as it piles, and the skies turn to lead, and the paths grow crusted and icy, it’s hard to keep trekking.

This is the point when I look at the candle flame:

Christ is the light.  He has come.  He is here.  He will come again.

The darkness will not overcome him.

Posted by Loren Warnemuende at 2:56 PM